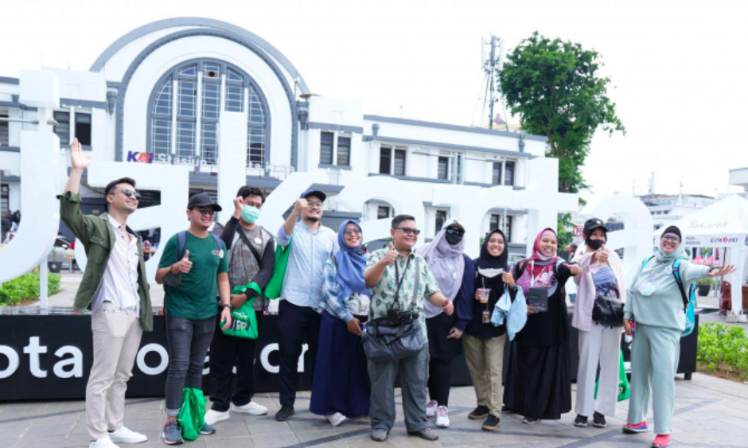 Public transportation has long been one of the more effective means to get around Jakarta, whether out of necessity or choice, for business or leisure.

The attractiveness of seeing landmarks and tourist destinations utilizing public transit is stronger than ever, thanks to a mix of an easy tap-and-go experience and comprehensive route coverage, as weekend city trips become more and more popular.

Even yet, finding your way around the various alternatives and paths can be challenging, especially for beginners. The best option is frequently an internet resource like GoTransit.

Jakarta's GoTransit function, developed by the online on-demand service Gojek, is built into the Gojek app and enables users to identify the most convenient routes to go to their destinations. Users also have the option to order a GoRide for even more convenience.

Stella Darmadi, head of global marketing for GoRide at Gojek, claims that the GoTransit service makes it easier for users of Gojek to organize their travel more effectively on a single platform.

We anticipate that GoTransit's effectiveness and convenience will further promote and increase public transportation use among the general population, both for getting to and from work and major tourist destinations.

GoTransit is the market leader in the selling of QR-based Commuter Line (KRL) tickets, according to internal data from PT Kereta Commuter Indonesia (KCI). Following their partnership, Gojek and PT KCI saw a three-fold increase in QR-based ticket sales for KRL.

Head of the Jakarta Tourism and Creative Economy Office Andhika Permata expressed his gratitude for Gojek's initiative for opening up a fresh channel for citywide tourism.

"As a nexus of Indonesia's varied cultures, Jakarta offers a complete tour for tourists, encompassing historical, maritime, gastronomic, shopping, fashion, and religious excursions - all of which are available in Jakarta," he said.

Andhika believed that by making it simpler to get to other places, especially tourist attractions, interest in traveling would rise among both domestic and international visitors as well as Jakartans.

"Gojek's efforts in developing the GoTransit function, which has increased the usage of public transit, are also appreciated by us. Additionally, it is anticipated that this endeavor would support our initiatives to encourage more frequent use of public transit by the general public, which will directly affect the viability of a healthier and greener Jakarta.

GoTransit allows users to purchase tickets for the KRL and offers route ideas. It also provides a QR code that must be scanned at the turnstiles at the destination station.

According to PT KCI VP Corporate Secretary Anne Purba, commuting on weekends was far more common than it was during the weekdays when most users were office workers traveling to and from tourist sites, malls, and other notable locations.

Internal KCI data on the number of passengers at stations on the weekends show this situation. With an average of 37,867 daily users on weekends in October, Bogor Station came in the first place.

On weekends in October, Tanah Abang Station, which is situated in the heart of Southeast Asia's largest textile wholesale outlet, saw an average of 28,709 daily users.

According to Anne, "We expect that with this collaboration, more and more commuter line customers can travel in Greater Jakarta, given the increasing number of transactions utilizing the GoTransit application."

Using public transit in Jakarta, such as the KRL, is now simpler to do, according to Pracandha Adwitiyo, a representative of Jakarta Tour Guide.

For instance, by exiting at Kota Station, travelers can explore the Kota Tua and China Town neighborhoods. You can get out at Jatinegara Station and go to Pasar Batu Akik and Pasar Jembatan Item if you wish to experience the Jatinegara neighborhood.

We think that having access to services like GoTransit will benefit the community because it eliminates any uncertainty about how to get to a popular tourist destination through route suggestions.